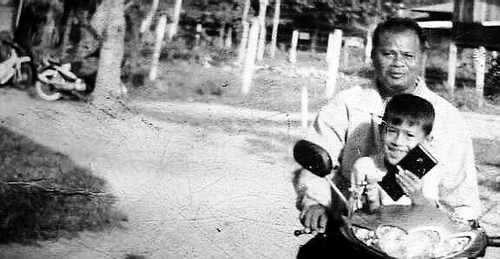 Next Thursday a court in Yala will decide on a very important case for victims of arbitrary detention and forced disappearance in Thailand. The court is due to give its view on what happened to Mayateh Maranoh (shown above with his son), who has not been seen since he was taken away by a paramilitary group in mid-2007.

According to his family, a group of rangers from Unit 4111 surrounded their house on June 24 and put Mayateh in a vehicle. They also took his car, mobile phone and licensed gun.

Mayateh’s wife and two children watched as he was driven away. It was the last time they saw him. After some days of searching, his wife, Suma-idoh, learned that the unit of poorly-trained local recruits had that evening held him at a school some five kilometers away.

Her constant efforts to interest state officials in her husband’s disappearance failed. The police did not investigate. The Department of Special Investigation under the Justice Ministry also declined to take up the case.

It fell to Suma-idoh to lodge a complaint herself. END_OF_DOCUMENT_TOKEN_TO_BE_REPLACED

Extracts from a new report: Human Rights under Attack, by the Working Group on Justice for Peace, Thailand

One policy that has been consistently counter-productive is the government’s reliance on poorly trained, ill-disciplined para-military forces and civilian militias. Although they have a long-standing history in Thailand, since 2004 their strength in the South has been increased massively. There is a confusing multiplicity of groups – the paramilitary rangers, an interior ministry force known as the Volunteer Defence Corps, several loosely supervised village volunteer forces and an unknown number of smaller sectarian militias – added to the regular army, police and border patrol police. The largest armed force in the South is a civilian militia consisting of Village Defence Volunteers recruited under the Internal Security Operations Command and the Village Protection Force recruited under Queen Sirikit’s direction tasked with protecting Buddhist communities. END_OF_DOCUMENT_TOKEN_TO_BE_REPLACED 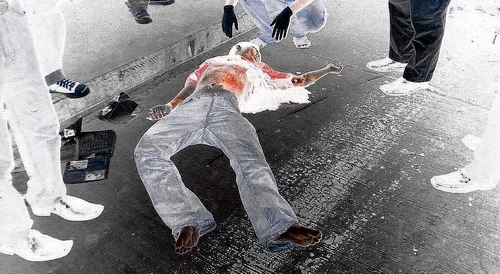 A high-level committee in Thailand is gearing up to recommend that people who enabled the killing of thousands in 2004 and thereafter be held criminally liable. It has in its sights former Prime Minister Thaksin Shinawatra and other parties to his “war on drugs.”

The committee is waiting for a new government to be formed in 2008 before presenting its findings.

At a glance, the committee seems like a good idea. Lots of people were killed thanks to government policies at the time [like the victim shown above], yet no one has been prosecuted. The anti-drugs war has quickly become another yawning hole in the country’s modern history. Any efforts to do something about it should be welcomed.

But the question that it begs is why did the thousands of murders, and a government policy to encourage them, not rouse Thailand’s existing multifarious investigating agencies? Why must this committee, with no actual authority, do their work for them?

END_OF_DOCUMENT_TOKEN_TO_BE_REPLACED

Getting the fish back into the water 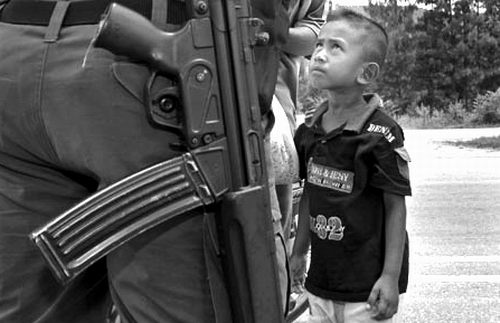 Photo: Boy at a checkpoint in the south (Steve Sandford)

When Madi Alilatay of Yala, southern Thailand was transferred to army premises on July 23 this year he was not charged with anything. He was not held under any law, for any reason, or for any purpose. At least, that is how the report of his custody reads. Although the 26-year-old plantation worker and eight others were ostensibly detained under sweeping emergency provisions in force across three southernmost provinces, the form consists of little more than officers’ and detainees’ names. Everything else is left blank. This is emergency law in action.

As a record of how a group of nine men were deprived of their liberty, it reflects an alarming disinterest in rules and procedure among soldiers and other personnel active in the south. And it is indicative of its type. The records of others taken during this time similarly reveal only who and when; nothing of how and why.

There are at least two reasons for this.